I've written about this before, on our 2008 vacation, and I think I described the experience well, so I'll just refer to my earlier post, called Basin and Range.  We drove Interstate 80 in 2008, which is a pretty busy road, all told.  On this trip we took Highway 50, and it isn't called "The Loneliest Road in America" for nothing. 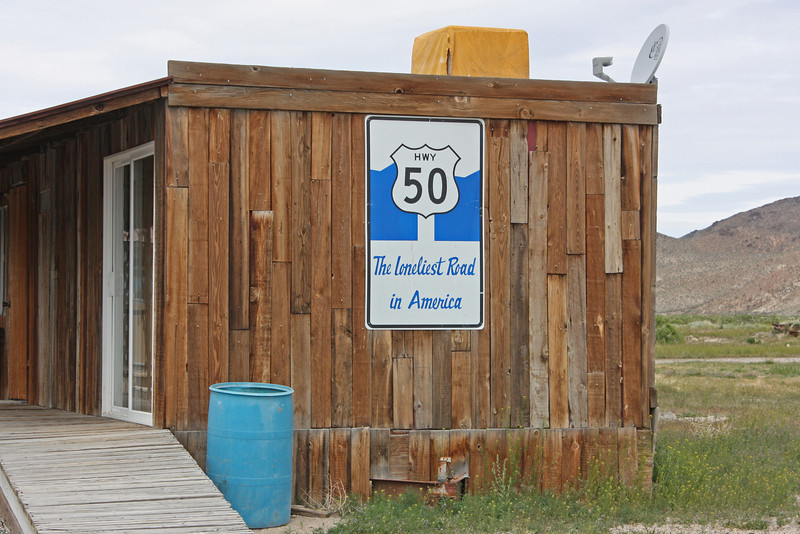 Highway 50 doesn't have the stately ballet of long-haul trucks and cars that I described in 2008, because it has almost no traffic.  On Interstate 80, you're usually in sight of at least a couple of semis and one or two other cars; on Highway 50, not.  So driving this road is a different experience.  You don't take 50 if you worry about breakdowns, or the fact that there's no cell phone service.

Note:  the photos in this post are just a sampling of the pictures at my SmugMug site, in the gallery called Crossing Nevada. You can see them all larger there, too.

Between Fallon, Nevada and the Utah line, there are exactly three towns, Austin, Eureka, and Ely.  However, 47 miles out of Fallon, where Nevada highway 361 peels off to the south, you'll pass Middlegate Station: 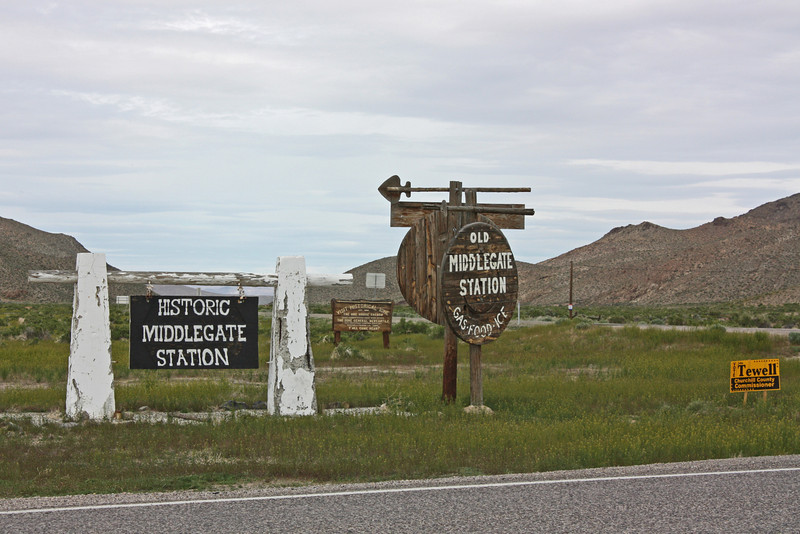 I wouldn't call it a town.  I'd estimate the population at maybe 10 (I found a 2006 post that estimated 19), plus some transient bikers and pool players.  This photo shows about 70% of Middlegate Station: 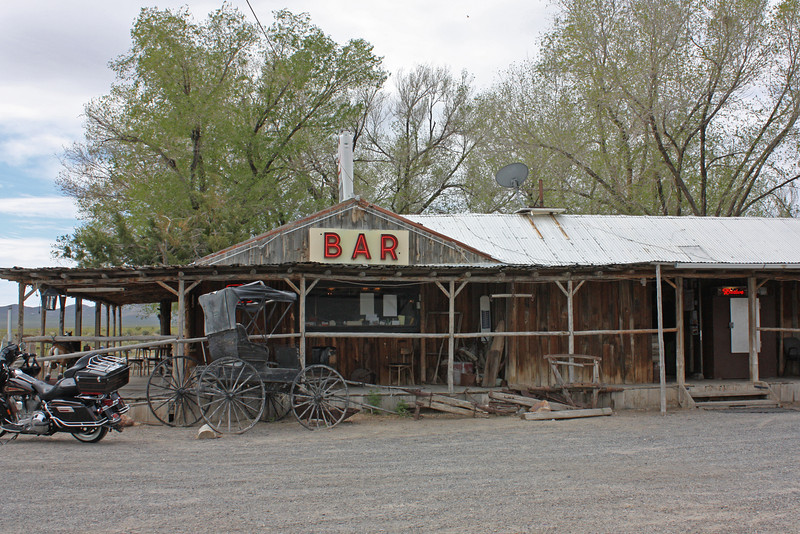 The rest of it is a motel, a gas pump, and a rusty propane tank.  And some abandoned vehicles. In all these photos, observe the crowded, built-up neighborhood.  Don't laugh too hard at Middlegate Station - it was a Pony Express stop.  Highway 50 was the Pony Express route.

It's 112 miles from Fallon to Austin, 70 miles from Austin to Eureka, and 77 miles to Ely - total driving distance 259 miles, and then it's another 70 miles to Garrison, just over the Utah border.  So for 329 miles, this is what you're looking at: 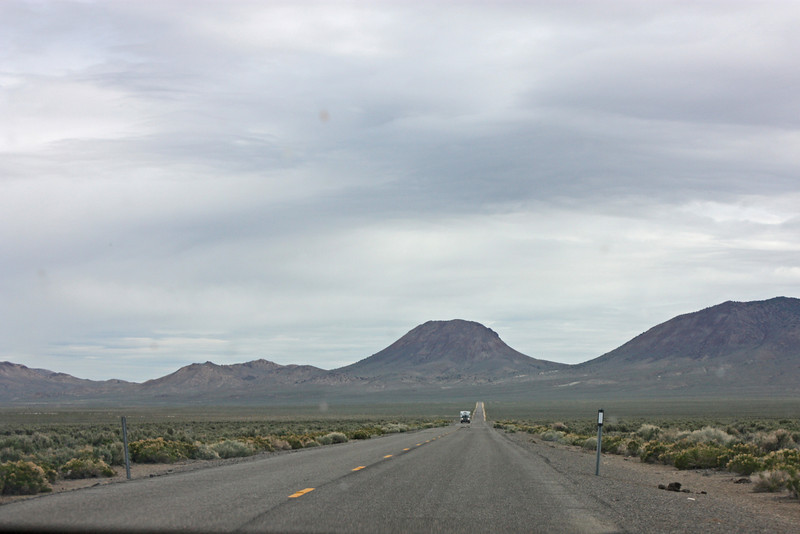 This may be why I tend to fall asleep on long desert trips.  I woke up when we stopped in Austin (pop. 340).  Highway 40 is the main street. 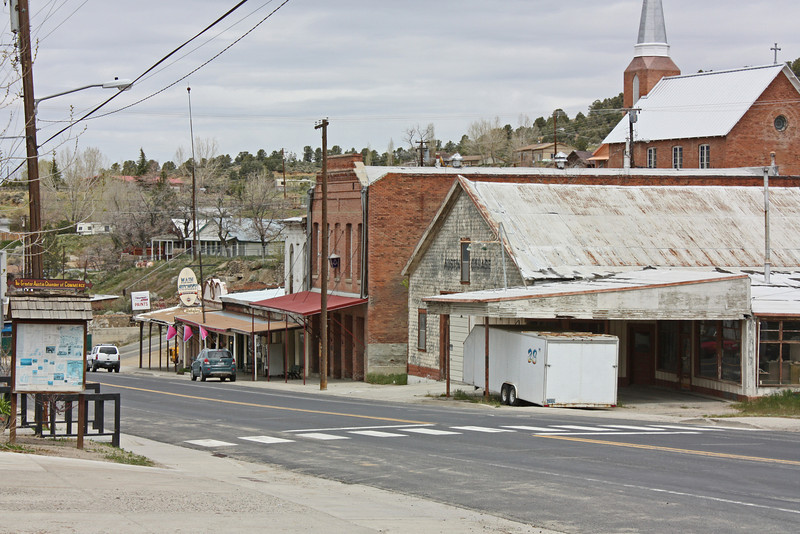 Since it's one of the only places in 329 miles with gasoline and rest rooms, everybody stops in Austin, including this elegantly turned-out biker dog we met at the gas station: 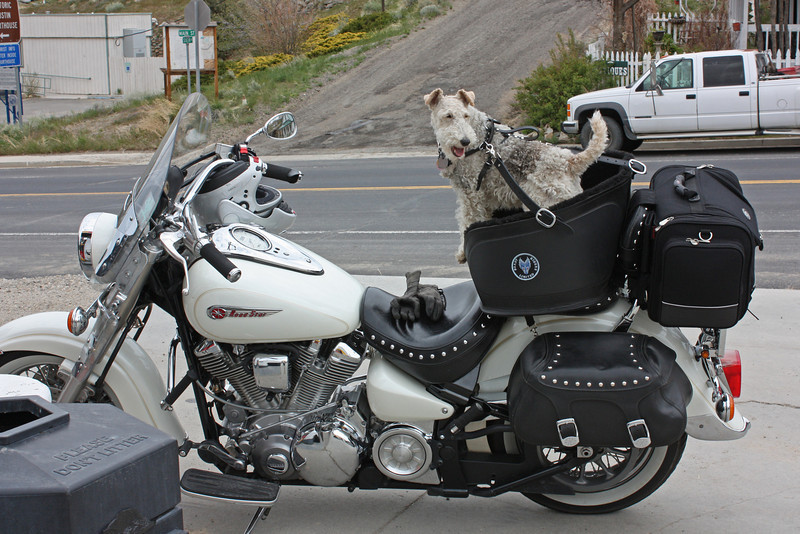 Between Austin and Eureka we passed the most interesting thing on this part of the trip:  the Sea to Shining Sea bicycle ride across America.  They were riding from Austin to Eureka that day, and we passed them on the road. All these guys are veterans and some of them are disabled, we passed at least 3 recumbent bicycles being propelled by the riders' hands and arms - and being "covered" from normal traffic by everything from other riders on normal bikes, to a SWAG wagon, to a local cop car.  We originally planned to stay in Austin the first night, but it was full of the Sea to Shining Sea riders, so we had to rearrange the trip.  I didn't get any pictures; I do occasionally take photos of mountains out the car windows but not of anything small and close like a guy riding a bicycle.

My husband tells me we drove through Eureka (pop. 1,103), but I must have been asleep.  I remember stopping for lunch at the petroglyph site, where I took this: 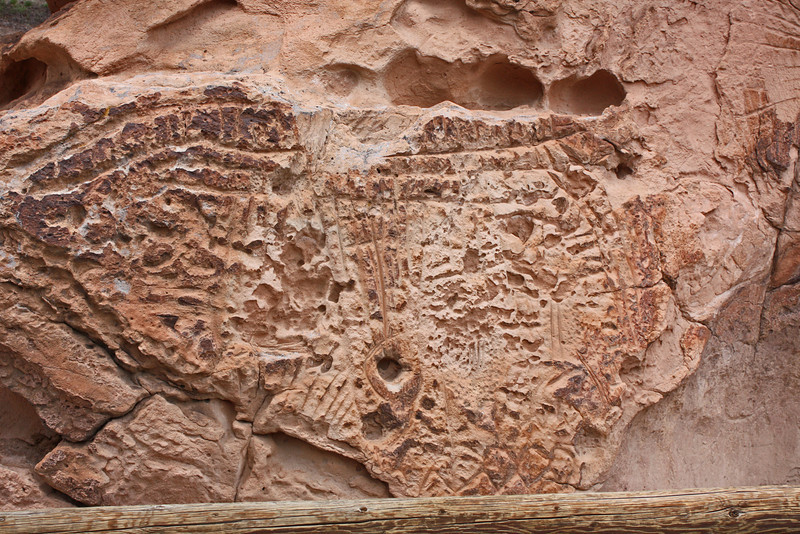 I was awake driving through Ely (pop, 4,041), but I'm not sure why; this was the Sunday of Memorial Day weekend, and the place was empty.  And empty is what the whole day continued to be, although we did get a glorious view of Wheeler Peak: 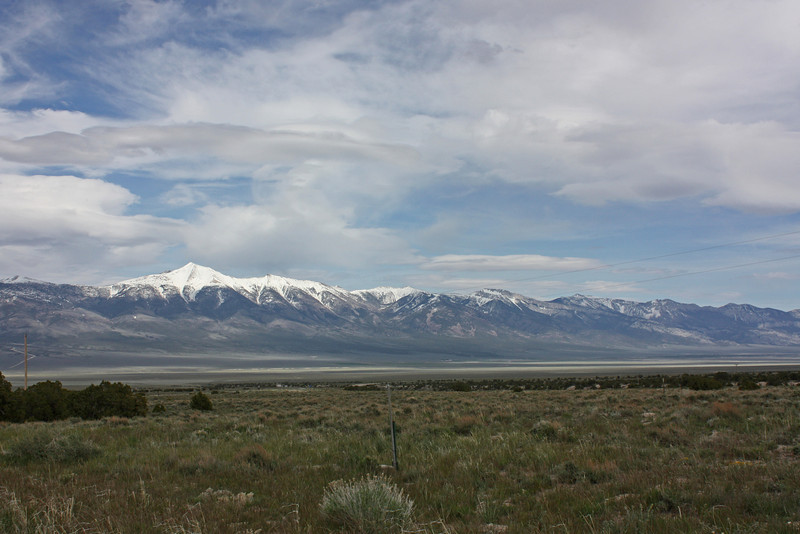 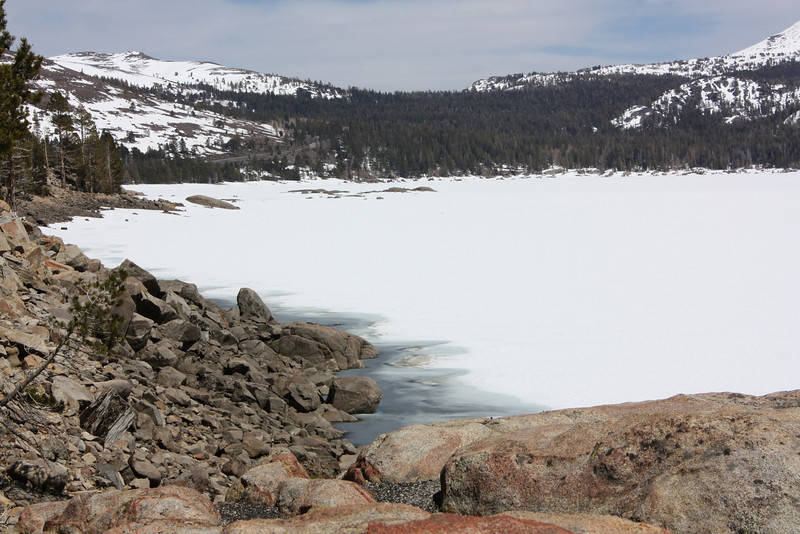 I'm always fascinated by the unmarked dirt roads that lead away from the highway into the distant hills - who goes there, anyway?  I'll talk more about the desert later, when I have some more photos up.
Posted by hedera at 9:04 PM No comments: Links to this post