A path to civil war

USA Today published the following quote, from the AP:

I have one question.

What do they think is going on in Syria right now, anyway?  It looks like a civil war to me.

I don't suggest that we should all crank up the armies again and pile into Syria the way we did into Libya.  But if Russia thinks what's going on in Syria right now isn't a civil war, I'd like to know how they define one.
Posted by hedera at 12:27 PM No comments:

The city of Oakland is facing the loss of $28,000,000 from its general fund, caused by two outside events:  One, Governor Brown eliminated redevelopment agencies in this year's state budget, and Two, the state Supreme Court ruled that the "give-back" the Legislature crafted, which would have let cities and states "buy" their redevelopment agencies back, was unconstitutional.  So - there goes the Redevelopment Agency money.

Why is this causing such consternation in Oakland??  Because they were using the Redevelopment Agency money  for general operating funds, that's why.  In addition to the 159 people who actually work for the Redevelopment Agency, the city was using those funds to pay, or partly pay, for positions all over the city, including (this one staggers me) half the mayor's salary!  What??

Why do they do this?  I've seen this before.  In the early '70s, I worked for the San Jose Public Library.  At that time, Lockheed-Martin was a major employer (pre-Silicon Valley), the economy was booming, the bucks were rolling in.  (Also pre-oil shock.)  And the city of San Jose, having found that citizens were always happy to pass bond issues, had developed the habit of funding basic operations (among other things, the library) out of those bond issues - so as not to have to engage in ungentlemanly conversations about, you know, taxes.

Then Lockheed-Martin lost a big contract.  In the intervening 40-odd years, the details of the disaster have escaped me; but I distinctly remember that they laid off what seemed like half the Santa Clara Valley, and the next bond issue that came up for a vote died like a skunk on the freeway.  And suddenly the city had payroll obligations that it didn't have enough general fund money to meet.  And citizens who were even less likely to vote for new taxes than they had been when they were approving bonds.  I forget what gyrations they used to solve their problem; I didn't lose my job, the city of San Jose still has a library.  But this all came back to me when I heard that the city of Oakland was paying half the mayor's salary with redevelopment funds.  (If I keep repeating that, it's because I still can't believe they did that.)

The cases in the two cities are identical.  They couldn't get the taxpayers to raise taxes enough to pay for what they wanted to spend (and the San Jose case was before Proposition 13, they only needed a majority), there was this other money "lying around," so they used it.  They ignored the fact that, technically, the other money had another purpose they were legally required to use it for.  I would love to hear the justification for paying half the Oakland mayor's salary out of redevelopment funds.

The minimal good news out of all this, for Oakland today, is that the new City Administrator has devised a plan to consolidate services and remove duplications, including eliminating a number of "jobs" that weren't actually being performed by anyone, and will be able to correct the situation by laying off no more than 105 people (out of just over 3,000) and not closing any libraries or senior centers.

This is the first glimmer of fiscal responsibility I've seen in Oakland since before we elected Ron Dellums.  God bless Deanna Santana.  The mayor (and previous city council member) has tried multiple times to get citizens to vote for property tax increases, without success; and she didn't succeed because none of us trusted the city to spend the money in a responsible and prudent way. We all suspected the city government was full of duplicated services and overstaffed departments, and if we gave them more tax money they would just continue to throw it away.

The new budget is responsible and prudent.  I'm still not ready to vote for a property tax increase.  But if Ms. Santana stays around and continues to talk turkey about consolidation and simplification, some day I might consider it.

On the other hand, the city council hasn't accepted the new budget yet.  Maybe it's too soon to relax.
Posted by hedera at 3:17 PM 1 comment:

Why I Oppose SOPA and PIPA

In the interest of the free Internet, I will do something that could potentially be illegal under SOPA/PIPA:  I will quote two extended discussions of the legislation from other blogs.

Yesterday on the global blog Crooked Timber (which I'm delighted to learn about), blogger Maria Farrell posted this:


Because Freedom isn’t Free: Why We* Blacked Out Crooked Timber
Yesterday

This is a detailed and thoughtful analysis of what could easily happen under SOPA/PIPA to almost any blog.  Including this one.  And it wouldn't even have to be anything I did:  if any poster on Blogger were to post allegedly pirated content, the attorney general would legally be able to - shut down Blogger.  All of it.

If this seems extreme, read this from Chris Heald at Mashable yesterday:

Why SOPA is Dangerous

Heald analyzes in detail exactly what's so threatening about this legislation, with links to the actual bill, so you can read it for yourself.

But this is my blog, so here's why I think this is wrong, based on reading these two sources (and other sources, but these were the best):

It is so broadly written that all anyone would have to do to shut down a web site, any web site, would be to file a complaint with the attorney general that the site was "facilitating the commission of copyright infringement."


Section 102(a)(2) permits the attorney general to take action against foreign sites (i.e., sites that do not fall under U.S. jurisdiction) if “the owner or operator of such Internet site is facilitating the commission of [copyright infringement].”

And as you notice, it doesn't even have to be a U.S. site.  This is the United States trying to impose its own legal structure on the entire world.  Must be okay because we're just trying to get criminals, right?

There is no definition of "facilitating" in the bill.  Here's the actual definition in SOPA (for the record this is sec. 102):


(a) Definition- For purposes of this section, a foreign Internet site or portion thereof is a `foreign infringing site' if--

(1) the Internet site or portion thereof is a U.S.-directed site and is used by users in the United States;

(3) the Internet site would, by reason of acts described in paragraph (1), be subject to seizure in the United States in an action brought by the Attorney General if such site were a domestic Internet site.


That's it. That's the entire definition.  That means that a site is a "foreign infringing site" if the attorney general says it is.  Don't let the code sections they list fool you.  There is no standard of proof in this act.  There is no way for a site to prove that it isn't "infringing."  You are infringing if someone says you are.

This disturbs me deeply.  This is another step toward the end of the rule of law in this country, following on the legalizing of indefinite detention of U.S. citizens in the N.D.A.A. recently.  Even more disturbing, the attorney general is only required to make a cursory attempt to locate the owners of the site before starting proceedings.  (Read the Mashable article, and the bill, if you don't believe me.)  So your totally innocent site could be blocked and you might not find out until you tried to go there yourself.

And they're doing this based on bogus numbers.  The GAO concluded about a year ago that commonly quoted "government statistics" on internet piracy can't be validated and appear to have been mostly made up:  see this article by Nate Anderson in ArsTechnica on a GAO review of commonly published piracy estimates:

US government finally admits most piracy estimates are bogus

If you haven't already done it, I urge you all to contact your representatives in Congress and the Senate and ask them to oppose these bills.  Sure, Internet piracy is wrong, but this isn't the way to fight it.

Labels: Political rants, We can do this better

In and Around Whistler

I'll admit I wondered about visiting a world-famous ski resort in the summer.  After all, don't you go to a ski resort to ski?  But the mountains around it are gorgeous, and when there's no snow you can hike.  There actually was snow, above about 5,000 feet - on the peaks, around 6,000 feet, it was quite snowy.  It only rained on us one day, and one of the days we were there was glorious - sunny and warm!  I'd say the activities we saw the most of included snowboarding (at appropriate altitudes, of course) and mountain biking (everywhere!).

The gallery On to Whistler starts with some photos I took on the drive from Powell River; waiting for the ferry at Saltery Bay I got some shots of a bald eagle, who was just hanging around the ferry terminal waiting for something edible to come along:

We watched the ferry come in and dock, a very slow and stately process.  We've gotten so used to cars and airplanes that we forget how long it takes to make a boat do anything in the water:

At Langdale I got some shots of seagulls from above, they were cruising below me, looking for garbage (sorry, but it's true):

I don't have a lot of photos of Whistler itself, the town just isn't that photogenic.  I've written about the bears we saw in another post, they have their own gallery.  The day I enjoyed the most was the nice day, when Jim went on a strenuous hike and I strolled around Lost Lake, a lovely lake that you can get to on the bus.  Here's Lost Lake from part way around, you can see the beach:

The high points of Lost Lake were the female merganser duck, with her five very small ducklings riding on her back:

I got several more photos of the ducks, and some very beautiful shots of the lake edges, but the other highlight was this fellow: 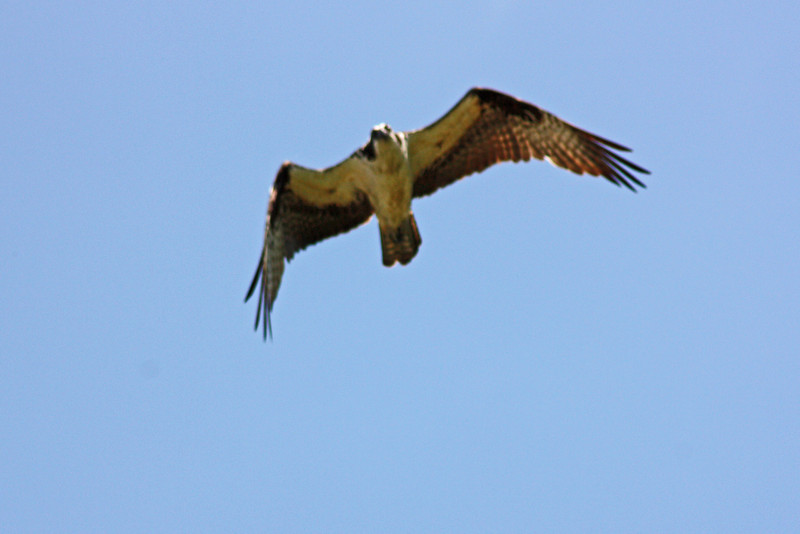 That, my friends, is an osprey, who hovered overhead long enough for me to get several other photos!  All the photos are at the gallery Lost Lake, for your viewing pleasure.
Posted by hedera at 10:18 PM No comments:

I was still more annoyed to learn that I can't modify the design and layout of my blog template anywhere except in the Chrome browser.  Trying to rearrange the layout in FireFox just doesn't work.  Grump.  For now, this will be my now blog template.  I still want the old one back but it isn't going to happen.
Posted by hedera at 9:17 PM 1 comment:

Be Careful What You Ask For

I've lost my nice template.  I tried one of Blogger's new templates just to see what it looked like - it looked crappy - and now I can't get my old template back because it doesn't fit in their "new" system.  Damn.  Watch this space.
Posted by hedera at 4:54 PM 4 comments: