We drove from Cortez, Colorado to the north rim of the Grand Canyon in a single day, winding around through the rocky desert country in southern Utah.  Continuing more or less south from the Million Dollar Highway, we hooked east a bit to go through Monument Valley.

To be perfectly honest, although I'm very good at finding places, especially if I have a map, I have no sense of "direction."  If you want to know where north is or what direction we're going, buy a compass or get a GPS - don't ask me.  (A compass is cheaper.)  The new Subaru we just bought has GPS, and it also has a compass display in the rear-view mirror that tells me what direction we're going; I'm not used to such precision.  The only place I can orient myself without devices is California, where there's usually a mountain range running north-south in view - and of course, there's that ocean.

We were in desert almost this whole day; I think there was a little cultivated area around Cortez.  Then the world ended, despite the fact that we were driving through and past Indian reservations.  Monument Valley is in a Navajo reservation.  Before we got to Monument Valley, we drove through an area called Valley of the Gods, which was (a) totally desolate, and (b) absolutely gorgeous.  Click on the photo to go to the full gallery for southern Utah and the Valley of the Gods. 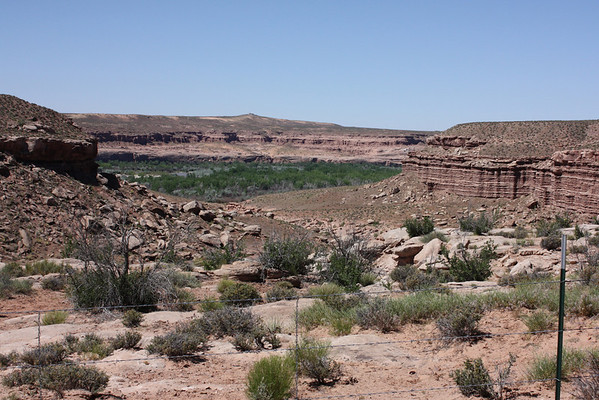 Apart from the road, and an occasional fence, there is no visible animal life.  You have to stop and look to see the critters.  And Monument Valley is even more so. My diary notes that if you expect to need anything in Monument Valley, you'd better take it in with you; and if you're smart, you'll stop at the gas station in Medicine Hat before you go in.  We passed a single Navajo site selling jewelry, pottery and rings (we didn't stop); it wasn't clear whether they'd run to indoor plumbing or not.  The visitors' center was down an unpaved side road which we didn't think the VW Passat would really like.  We carried our lunch in, and eventually just pulled the car into somebody's farm road and parked it with its back to the sun.  The amazing thing was that there was a farm road.  You'll see the photos in the gallery below. 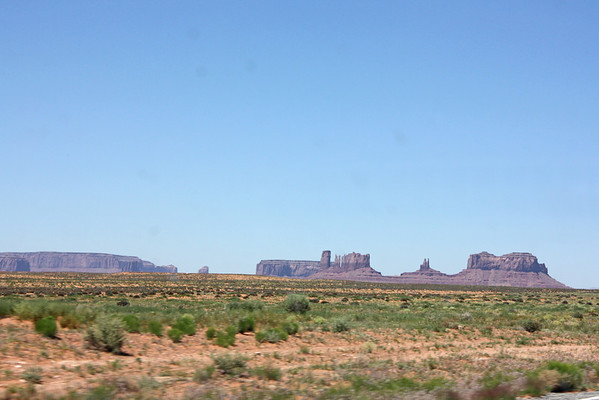 I defy anyone to drive through Monument Valley and not stop to take at least one photo - unless you simply don't own a camera or a cell phone!  But it gets overwhelming after a while.  I've never felt so small in my life; or so vulnerable.

In case you don't believe the colors, honest - they really looked like that.  I decided on this trip that you can't really understand southwestern pottery unless you've driven through those mesas and seen the colors of the rocks and soil.  My sister has given me several Native American pots from Arizona, and the colors make much more sense to me now.
Posted by hedera at 10:05 PM