I just got around to processing the photos I took while I was in Carmel for the Bach Festival.  Since I spent most of my time doing non-photographic things, they boil down to two groups - some shots of the Carmel Mission, interior and exterior (taken while waiting for the organ concert), and some photos of surf on the beach, just before I came home.  I learned on this trip that beaches don't appeal to me as much now as they did when I was 11.  Somehow the prospect of getting sand in everything made me take some long lens shots from the pavement edge and leave the soft white sand to the people who were willing to live with it!

The interior shots of the mission were very interesting, they have a lovely reredos (look it up!): and the only statue I've ever seen personally of St. Joseph with the Holy Child instead of the Madonna: The pipe organ is quite beautiful and visually very baroque.

When I got down to the beach, a couple of days later, it was a gorgeous day with a strong surf running, and I got some nice ocean shots.  I got a big wave just breaking: and we mustn't forget the surfer waiting for his wave: 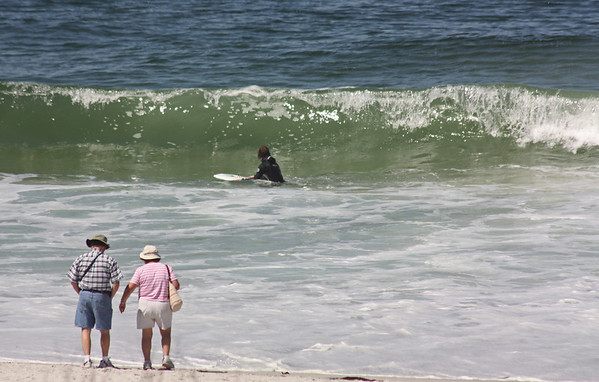 It was so gorgeous I was surprised there was only one surfer.  Feel free to check out the rest of the photos.
Posted by hedera at 9:12 PM