Oil in the Gulf

Talk of the Nation today had a discussion of the Gulf oil spill, following Obama's press conference, discussing who is and isn't doing what.  One of the speakers, by phone from Louisiana, was James Carville - remember the Ragin' Cajun from the Clinton administration?  Mr. Carville is only moderately pleased with Obama:

"For the life of me, I can't believe that he hasn't called the secretary of the Interior on the carpet, and in fact, he didn't know today that they had actually fired - at least somebody finally got fired in this government. That was wonderful."

and feels he isn't pushing BP hard enough.  Carville specifically wants to see Obama file criminal charges against BP, and sock them with billion-dollar damages.  Listen to the broadcast, or read the transcript; Carville is always entertaining, and he's really fried right now because he's been out in the marshes, and he says there was nobody there cleaning up the oil.  But his final point was this:

... if he [Obama] drops his hammer on BP, who believe - you understand the chairman of the BP board had the utter gall to say, look, we're a big, important company, and the U.S. is a big, important nation. If he made, if he got them to the brink of going to jail and made that company put up billions of dollars to recompense people for this disaster, I think his approval rating would be 75. I do.

Criminal charges for this sort of corporate misfeasance.  Interesting concept, isn't it?  It's becoming clear that BP was cutting corners in every direction.  But it made me think of the corporations insistence that they are "persons" and that their political donations are protected "free speech."
If a corporation is a person, and has all the rights and freedoms of a person, does it not also have all the responsibilities of a person?  To obey the laws, to refrain from destroying the environment?  A guy in the L.A. area was convicted of setting a major wildfire, and I believe he went to jail.  (But he was just a guy.)  This is worse than a wildfire.  This is turning into one of those events you date things by, like the Kennedy assassination or the Rodney King riots.  We're going to date things by this for a long time, and it's happening because BP put profit ahead of safety.
If corporations are "persons" before the law, then when they break the law, they should face a court and a jury, just like actual persons.  And if they are convicted, somebody should do some time.  That's what happens to real people.
Posted by hedera at 10:47 PM 1 comment:

The yard is lush this spring.  It should be - it's the end of May and it rained yesterday!  My husband planted some foxgloves in the yard, and we got quite a handsome specimen: 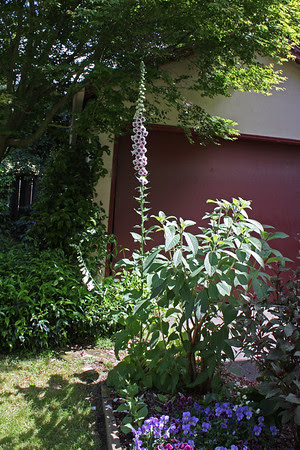 You never know when you're going to get one of these giants.  We had one once that was over ten feet tall; this isn't that tall, but it's respectable.  I stood next to it, and I estimate it's seven feet tall or thereabouts.  The blooms are gorgeous: 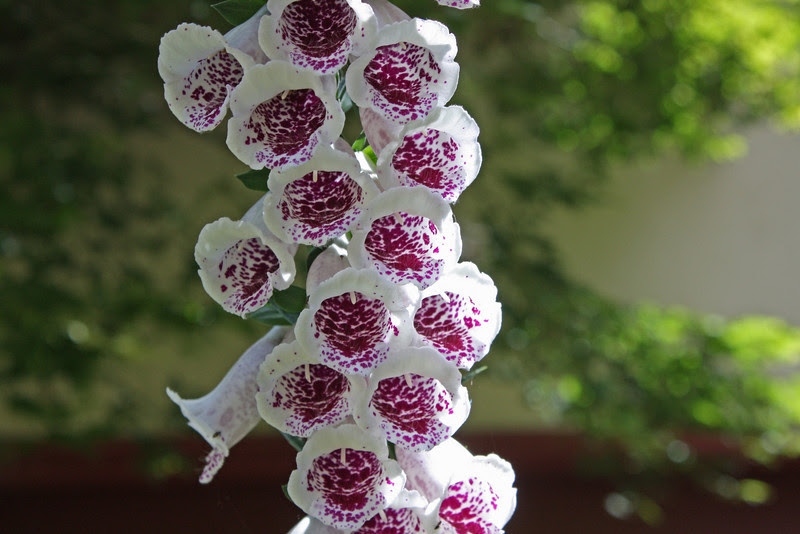 It's tall enough that it leans rather threateningly across the bed: 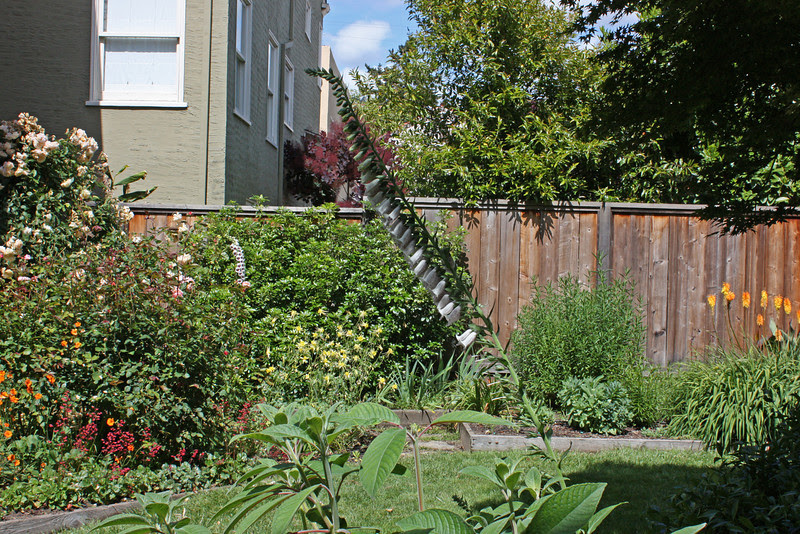 Unfortunately, its height was its undoing.  It rained all day Tuesday, and by the end of the day, that elegant stalk was flat on the ground.  It's sitting in a vase on the dining room table now, and we'll enjoy it for a day or two more.
Posted by hedera at 8:34 PM 4 comments:

The latest brouhaha in the blogosphere has been sparked by one John Stossel, a columnist for Fox News.  Mr. Stossel has expressed the opinion that a major section of the Civil Rights Act of 1964 should be repealed, to allow businesses serving the public to refuse service on the basis of race.  He may have thought this up himself, although we heard the proposal first from Rand Paul.  His position seems to be that, since "everybody" now knows that discriminating on the basis of race is wrong, businesses that do so will lose customers through the operation of the market.  Since it didn't work that way in the Jim Crow era, I don't know why he thinks it will work now, but he's entitled to make a public fool of himself if he chooses.

I learned of this through a FaceBook "share" of a petition, originating on ColorOfChange.org,  entitled, Tell Fox:  "Fire John Stossel."  The petition is addressed to Rupert Murdoch, and asks him to fire Stossel to "show America that your media company has no place for the values Mr. Stossel espouses."

I agree with the petition originators that Mr. Stossel's (and Mr. Paul's) opinions are offensive.  I also believe they're wrong.  But I'm afraid they (the petitioners) display a total lack of understanding, first of the First Amendment to the Constitution, and secondly of Rupert Murdoch.

I feel quite strongly about the First Amendment.  Like Voltaire, I don't agree with a single word Messrs. Stossel and Paul say, but I will defend to the death their right to say it.  There've been a lot of arguments recently over what does and doesn't constitute protected political speech, but this case is practically the type specimen.  He thinks we should repeal part of a law.  He has every right to express that opinion.  It's a long, long journey from an opinion on a news broadcast and the actual repeal of part of the Civil Rights Act.

If you only allow free expression of opinions that you approve of, you don't support free speech.  Speech is only truly free when it's available to the opinions we despise.  What better way to refute these positions than to state them publicly and debate them openly?  Sunshine is a great disinfectant.

Then there's the petitioners' misunderstanding of Rupert Murdoch, which is quite spectacular.  Mr. Murdoch is a known quantity.  He's been around for a long time.  Fox News allows Mr. Stossel to express his opinions there because Fox, and Mr. Murdoch, understand that controversial opinions sell air-time; and selling air-time is what Fox and Mr. Murdoch are all about.  Are they exploiting the First Amendment for commercial gain?  Sure they are.  So are a lot of people.  And it's perfectly legal as long as all they state is opinion, and they don't try to present it as fact.  I don't know whether Rupert Murdoch personally agrees with John Stossel or not, but it doesn't matter.  Mr. Murdoch's personal opinions are irrelevant; the political slant of the Fox News organization is very clear, extremely consistent over time, and lined up  perfectly with Mr. Stossel's rabble-rousing opinions.
Posted by hedera at 5:36 PM 1 comment:

I attended a 90th birthday party today, for George C. Hildebrant, the man who directed my high school choir, then called the Napa High School - Junior College Choir.  We should all do this well when we're 90.  He uses a walker, but he stood up and conducted us in singing several pieces.  Most of the people who came had sung under "Uncle Hildy" during his tenure as choral director at Napa High, which began in 1947 and ended in 1966.

The most amazing and charming event of the afternoon was the appearance of the current Napa High School Chamber Choir.  My friends who organized this told me that the current choral director, Travis Rogers, called them and asked if the kids could come and perform!  And they're a Really Good a capella chorus - beautifully blended, singing as with one voice, everything memorized.  (Some of you who read this will have heard the choirs from Mt. Eden High School, at the Paramount in Oakland; the Napa kids are their equal.)  I looked at their web site, Napa High Choral Boosters, and they're supported by what looks like a pretty standard 501(c)(3) - because, of course, music is a "frill," which we can't afford to support in our schools!  I Googled them,  and they've won international competitions.  They sang a Durufle piece; their director told us they had performed it in Paris, at Notre Dame - a by-invitation trip they took over spring break this year.  They performed two pieces accompanied by a young man with a hand drum; apparently they travel with their own percussionist.

With the current Napa High chorus, we had over sixty years of high school choral tradition represented in that room.  Everybody was crying.  Everybody's life was changed by it.  I can still sing the Hallelujah Chorus from memory (soprano anyway) because of him; we memorized everything.  And we were good - we won choral competitions too.  I still remember the one at UOP in Stockton, with massed choruses walking down the stairs after the final performance, all singing the seven-fold Amen from The Lord Bless You and Keep You, echoing in the roof.

And it all began with George C. Hildebrant.  Roughly a hundred people (not counting the high school singers!) came to this event, from Montana, from Ohio, from New York City, and from all over California, to pay respects to this man who flew bombers over Germany in World War II, and came back from a POW camp to teach generations of people how to sing together.

Happy Birthday, Uncle Hildy.  And as many more as you can make.
Posted by hedera at 9:14 PM 2 comments:

There has been considerable chatter recently about the practice of a "secret hold" in the U.S. Senate, which is preventing numerous non-controversial Obama nominees (among other issues) from coming to a vote in the Senate. A group of senators, headed by Claire McCaskill of Missouri, is trying to put a stop to the practice (see Sen. McCaskill's recent article at Huffington Post).  Given that Missouri is the "Show Me" state, Sen. McCaskill's efforts are incredibly appropriate.  She's written a letter to the Senate leadership, signed by over 30 senators, pledging all the signers not to use secret holds.
It won't surprise anyone that none of these senators is a Republican.
I agree 100% with the good senator from Missouri.   Secret holds are a despicable and cowardly way to do the public's business.  They smack, frankly, of eight-year-old boys in a treehouse, with secret passwords and oaths.  "I'm going to stop the nation's business in its tracks," says the secret holder, "because I have reservations about this nominee or that bill; but - I don't have the cojones to put my name on it.  Why, if I put my name on it and somebody objected, I might not get re-elected!"
Do you people have NO idea how this looks from the outside??  Sen. McCaskill and her fellow signers obviously do.  I'd like to say that this practice is beneath the dignity of the U.S. Senate, except that the members of that body so obviously disagree.  "Secret" anything, with possible exceptions for genuine national security issues (and I have my qualms about that, given the abuses it has covered), is unsuitable for the governing body of a democracy.  The first question you ask about a "secret" is:  what are you people trying to hide??  If the answer is just, "who I am," that's not a reasonable excuse.  We elected you to use your judgment about the best way to govern this country, and now you're afraid to stand up and say what your judgment is.
I think any senator who hasn't publicly pledged not to use the secret hold should have that used against him or her when re-election time comes.  Both my senators, I'm happy to say, have signed the pledge.
Sunshine is the best disinfectant.
Posted by hedera at 11:26 AM No comments: