In 2006 we decided that driving to Washington state to visit Lake Chelan would be interesting.  Lake Chelan is a relatively narrow, very long lake in eastern Washington, mostly surrounded by the Lake Chelan National Recreation Area.  We planned to stay at Stehekin, a small resort near the head of the lake, reachable only by boat (or emergency helicopter) from the town of Chelan at the foot of the lake.

We left on July 23 - you've probably forgotten, but in late July 2006 we had a record-breaking heat wave (at least, for then) - according to my travel diary (and USA Today at the time), it was all over the U.S. and southern Canada.  Californians expect temperatures in the 100s when driving up I-5 in the summer, but we usually expect them to drop quite a bit when we cross the Oregon border; no such luck.  My diary says it was 102° when we stopped for lunch at the Lake Shasta overlook, and that's typical of the trip but not of Lake Shasta.  It took us 3 days to get to the town of Lake Chelan, and I don't think it dropped below 95° degrees the entire time; and I nearly got heatstroke touring a (very beautiful) garden we stopped to see.

So on July 26 we took the Lady of the Lake II from Chelan for the four hours it takes to get to Stehekin - the jet boat does it in one hour, but this is the local, it stops about 4 times to offload and onload passengers and mail.  I'm almost sure I remember a bunch of kids heading for a Christian retreat, located up the lake on the west shore, past the last point you can drive to.  Stehekin is on the east side, and driving isn't even a remote option.

By two in the afternoon we had moved our stuff into the cabin.  The cabin was not air-conditioned (although the cross-drafting was very good); the temperature was still knocking against 100°, somewhat mitigated by a strong and steady north wind from the head of the lake. We walked over to the visitors' center and read the notices about the Tinpan and Tripod fires, burning some distance away.  Then we walked out and looked south and saw - smoke.

I thought it was smoke from the Tinpan fire, and went for my camera, but by the time I got back it was very clear that this was a brand spanking new forest fire, less than 3 miles away and on our side of the lake, driven by 100° temperatures and a wind I estimate at about 20 MPH.  Here's my very first photo of the infant Flick Creek Fire: 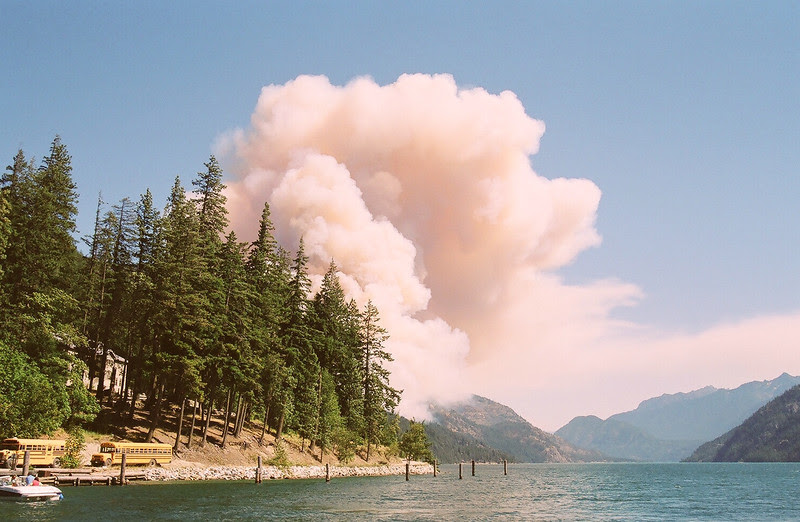 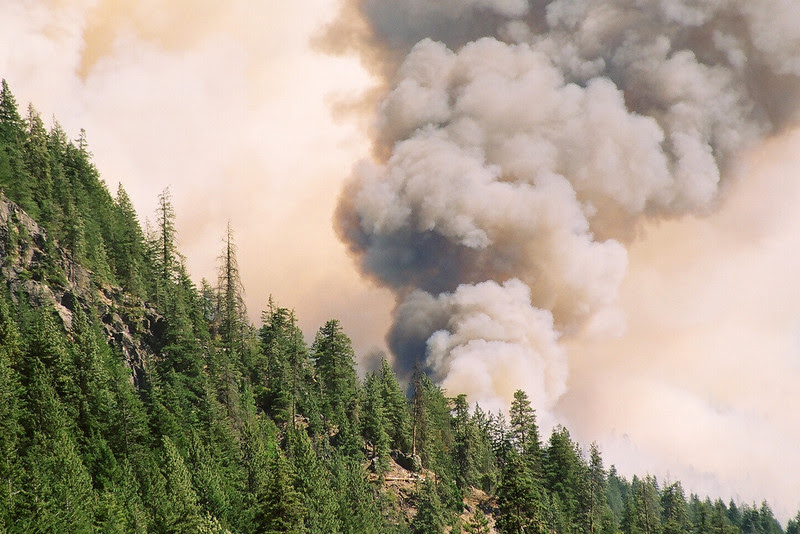 We actually stayed our scheduled two nights.  The saving factor was the wind; it never once slackened or shifted, and it blew the fire away from us, and of course the first thing they did was saturate the area right near the resort, with helicopters dumping lake water.  Nonetheless, the jet boat I mentioned was taken out of daily service and berthed in Stehekin for the rest of the time we were there.  Just in case.  By the time we left the fire was over 3,000 acres, and it was still smoldering as we passed it on the way out: 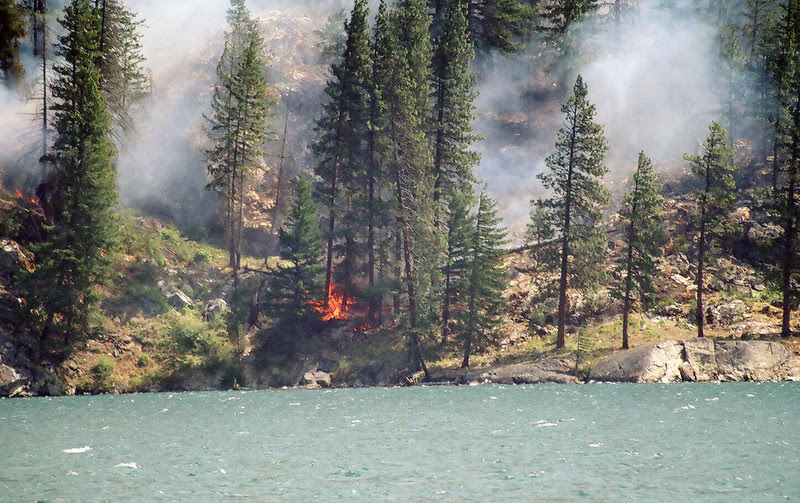 The rest of my photos of the area and the fire are in my gallery The Flick Creek Fire.

I'm not sure I recommend Stehekin, although they don't have fires every year, I'm sure.  The food was mediocre and low on fresh produce - almost everything they cook has to come up the lake by boat.  The cabins are, well, spartan.  But the surrounding area is stark and beautiful - mixed forest, some pine, some broadleaf, very dry and dusty.  It has a small permanent community of people for whom the wilderness is more important than the availability of cars or dry cleaners, who don't mind sending their kids "down" to Chelan to boarding school past the 8th grade.  If you like being a long way from civilization, this may be your spot.
Posted by hedera at 7:47 PM